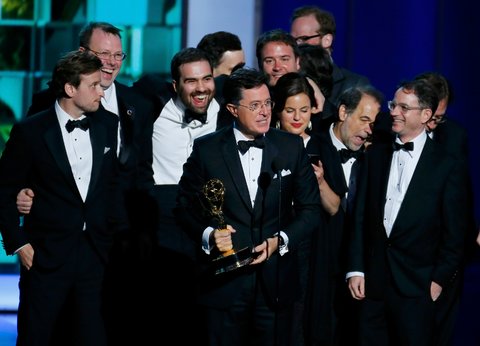 Traditional formal wear at the 65th Primetime Emmys[/caption] On Sunday, September 22, 2013 the 65th Primetime Emmy Awards swung into action with the help of once again host Neil Patrick Harris. A professional at hosting big time events and award shows, NPH dazzled viewers and the fantastic celebrity audience before him with great style and even more pizazz. He also stunned everyone with a performance in the middle of the show. However, he wasn't the only one stealing the show. Actors across the room shinned gracefully in men's formal wear fit for the occasion, ensuring that the red carpet wasn't the only colorful piece around. [caption id="" align="aligncenter" width="540"]

Kevin Spacey rocks a bow tie and the blues, effortlessly.[/caption] A major film start who's recently traveled to the smaller screen, actor Kevin Spacey's look was out of this world. It was similar to this deep blue tuxedo with a satin-framed edge, and he looked dashing as ever. With an extraordinary twist, Spacey wore a pleated bow tie along with an upside down American flag lapel pin, in homage to his role in House of Cards. The midnight color suited him quite well, working magnificently with black lapels. A cleaned up Aaron Paul donned a similar look of dark blue. In comparison to his traditional baggy jeans and interesting hoodies, he donned a dapper look that was all the more opposite of his on screen role in Breaking Bad.  [caption id="" align="aligncenter" width="460"]

Derek Hough leaps with joy after winning an Emmy![/caption] After performing in a dashing homage to Mad Men, professional ballroom dancer Derek Hough earned an award for his Outstanding Choreography in Dancing with the Stars. He was all smiles; having changed from his traditional red carpet black tuxedo to a jacket with a pop of color.  Wearing a deep maroon tuxedo jacket and a skinny necktie, he embraced the change of hue with open arms and dancing feet. Men's formal wear doesn't have to be  all black and white. With a multitude of fantastic colors and varieties to choose from, you can change up your evening wear and formal event look in a matter of minutes. A change of color could improve the pace and feel of your entire outfit. Speed up your styling efforts with a bit of color and a whole lot of class. Funny man, Will Arnett,  provided some much needed relief from the black and white tuxedo. His charcoal peak lapel tuxedo went famously with his crisp white tuxedo shirt and black tie. Jon Hamm rocked a serious beard with his ivory tuxedo jacket. A promising move away from the darker colors of the night, Hamm pushed his look to the light of Hollywood. For your own dose of Emmy Award winning style, embrace a new color for a new experience. Reach new heights by allowing your tuxedo color to travel outside of its comfort zone. Don't stay buckled down by traditions if you have a chance to be both extremely dashing and different.
Previous
Next